From the Chicago Fed: Index Points to Economic Growth near Historical Trend in June 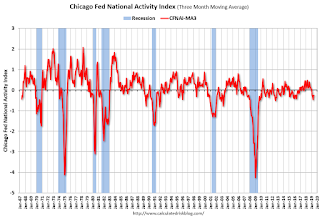 This suggests economic activity was below the historical trend in June (using the three-month average).

According to the Chicago Fed:

The index is a weighted average of 85 indicators of growth in national economic activity drawn from four broad categories of data: 1) production and income; 2) employment, unemployment, and hours; 3) personal consumption and housing; and 4) sales, orders, and inventories.
...
A zero value for the monthly index has been associated with the national economy expanding at its historical trend (average) rate of growth; negative values with below-average growth (in standard deviation units); and positive values with above-average growth.